GETTING LOST IN FES. SIMPLY A...MAZE...ING! - HWIT Creative Branding Agency
HWIT Creative are an integrated branding, design and digital agency. For over 30 years our craft has been moulded around large brands and industries. Being a small creative agency also means that we know how to nurture small businesses (SME’s) too.
Digital agency, website design, packaging, creative design, Based in Cheltenham, Gloucestershire
310
post-template-default,single,single-post,postid-310,single-format-standard,bridge-core-3.0.5,qode-page-transition-enabled,ajax_fade,page_not_loaded,,qode-title-hidden,qode_grid_1300,side_area_uncovered_from_content,footer_responsive_adv,qode-content-sidebar-responsive,qode-theme-ver-29.2,qode-theme-bridge,wpb-js-composer js-comp-ver-6.10.0,vc_responsive 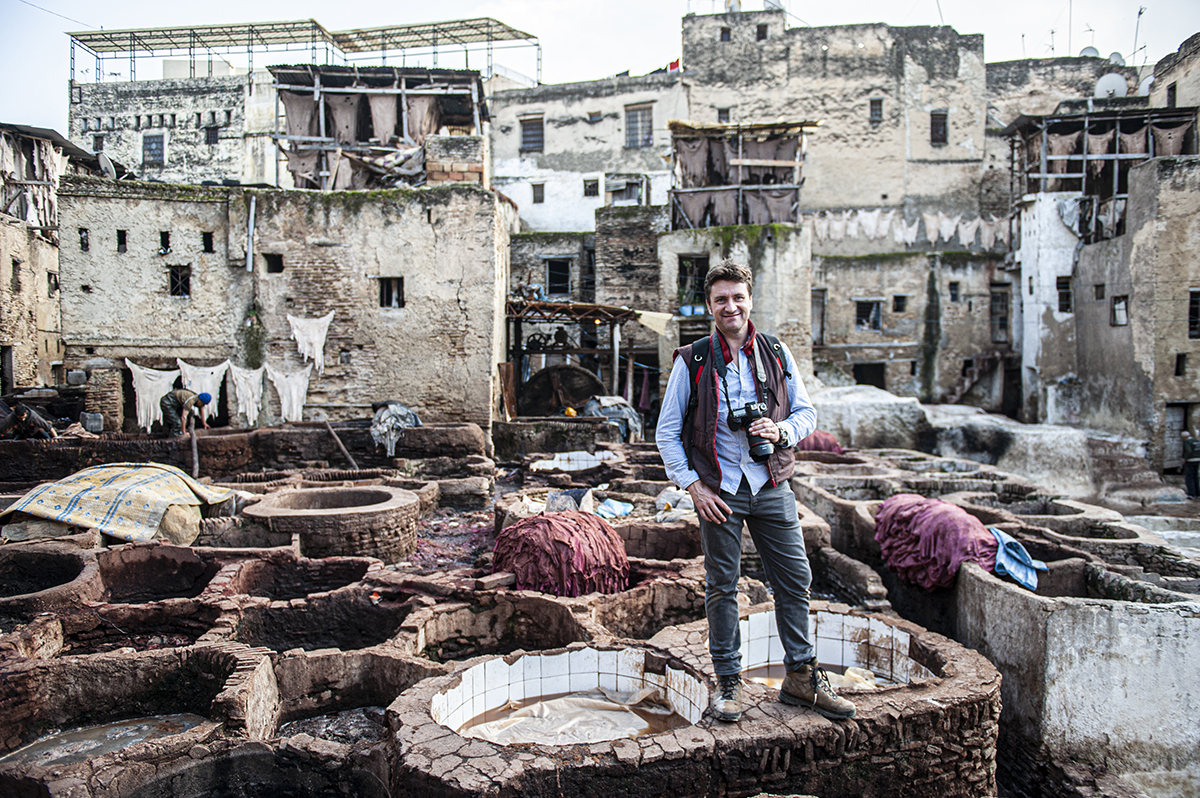 Posted at 09:00h in Photography by Steve White

Destination: Fes, Morocco
Purpose: To blend with the locals as best we could, and photograph the experience
The boys: Ben & Steve (me)

Journey to Fes from Marakesh

Ok, so having our backpacks removed from the boot of a taxi, and dumped on the pavement outside Marrakech Airport by an angry moroccan (who was unwilling to haggle our fare, whoops) wasn’t an ideal start to our trip. But it did earned a school boy giggle none-the-less.

We borded the ‘Harry Potter’ type carriage and made ourselves comfortable. We could hardly contain our excitement, not just because of the lure of Fes with its medieval buildings, sounds and smells, but also the 330 mile journey through the heart of Morocco.

Although Ben had visited Morocco three times before, Africa was a new experience for me. The views of the snowy tipped Atlas mountains were just majestic. “I have to come back here, just for those” I thought to myself. We trundled on our way, passing farmers and mules working the surprisingly lush green landscape, children playing precariously close to the tracks just a little way down from their homes. The buildings were rugged on the outside when compared to the homes we were used to, but then I caught a sneak peak through an archway to reveal exotic and luxurious botanical living spaces. It was sublime!

Along our journey we had many colourful and varied travel companions visit the carriage, and like two excited little school boys; we attempted to speak to every single one of them. We spoke average English at best, and even worse French (apparently Morocco was made a French protectorate in 1912 but regained independence in 1956. Check me out – ha).

Three people stood out for me; an Islamic religious man (possibly an Imam) called Aariz. He was a man of few, but very profound words. A 23 year old female school teacher; Nadira from Casablanca. Nadira expressed what it was like to live and teach in the city, and also what it was like to be a career woman in Morocco and the obstacles she faced. The final, and somewhat suspect (we were enlightened later in our travels) son of the owner of the largest tannery in Africa, which also happened to be in Fes.

WOW! We couldn’t believe our luck. We expressed our desire to not just view ‘his family’s’ tannery from the viewing platforms, but to get up-close and personal with the skins and more importantly the local characters that worked there. His name escapes me (our minds was blown), but he promised to send one of his guys over to our Riad at 10am the next day for our VERY special and personal tour. We all departed the train and went our separate ways. Still in disbelief, we set out to locate our Riad in the maze that was Fes Medina.

Breakfast on the Riad terrace

What a view, what a breakfast!

Sure enough, dead on 10am an elderly gentleman was waiting outside our Riad to take us on our tour of the Tannery. The chap on the train was a man of his word after all. During the long walk though the winding streets and alleyways of Fes we noticed that, unlike Marrakech there were no mopeds out to murder us where we stood. In fact, there we no motorised vehicles of any kind, just mules and rats. Apart from the odd glimpse of 21st century tech we really could have been walking around in medieval … anywhere!?

Built in the 11th century, this is the largest tannery in Fes. It is located in the Fes el Bali, the oldest medina quarter of the city, near the Saffarin Madrasa along the river. Since the inception of the city, the tanning industry has been continually operating in the same fashion as it did in the early centuries. Today, the tanning industry in the city is considered one of the main tourist attractions. The tanneries are packed with the round stone vessels filled with dye or white liquids for softening the hides. The leather goods produced in the tanneries are exported around the world. (Ref: Chouara Tannery, Wikipedia. This page was last edited on 26 December 2019, at 19:54 UTC)

As you can see, we got exactly what we asked for. We were allowed to go anywhere, even without signing a health and safety certificate too (teehee). A different chap, perhaps the manager showed us the processes from the the raw skins to dying to drying. Did you know that pigeon shit is used as a softening agent. It allows the hides to become malleable so they can absorb dye? Not the first useful fact in this blog, eh?

”So, what about the smell” I hear you ask? Yes it was putrid, but did we care … did we heck (well, maybe a little)! To be frank, we were just humbled to be invited into the heart of this amazing tannery. I am sure the workers just saw a couple of idiot tourist photographers asking silly questions, repeatedly thanking everyone, and generally getting in the way.

Jamie Oliver, eat your heart out

I love cooking. So after being inspired by certain celebrity chefs cooking with locals around the globe I wanted to ‘do the same’(?). We had pre-booked a guide for the day. Handy, given that we had to source ingredients, prepare a tajine and slow cook it in a communal oven for 4 hours. So, off we toddled to the local market:

Will camel meat do? YES PLEASE!

Please take care of our food baby. We’ll be back in 4 hours.

Job done and in the communal oven. What shall we do for 4 hours?

Ben didn’t get ‘the shot’ he wanted from the Chouara tannery the day before, so the guide started to lead us to another smaller Tannery close by. On the way we just couldn’t stop spotting awesome photo opportunities. We practiced good etiquette and asked permission before we pointed our unsightly cameras into peoples faces. Not everyone obliged and I can’t say I blame them. It’s easier our side of the lens for sure. That said SO MANY locals were very accommodating, and really didn’t mind two fools grinning from ear to ear (some would say gurning) pointing and shooting at everything, everywhere:

Seems I wasn’t the only one loving to watch Ben work his magic. Charming to the last.

COME ON BEN, DINNER IS READY!

Were we scammed, do we care?

Do you remember to fortuitous meeting on the train?

We got around to telling our guide about our chance meeting with the son of the tannery owner, and what an amazing day we had there. He paused, then he laughed, VERY LOUDLY. We instinctively laughed along with him. But he kept laughing for what seemed like uncomfortable amount of time.

“You boys have been had” He said, still laughing. “That’s the oldest trick in the book. Ha-ha-ha”

At the end of the day, we just didn’t care. Yes we voluntarily paid around €50 for the day, but that was more than worth it for the experience and knowledge shared with us.

Remember I said that I would bring my family back to Morocco? Well this is us, a year later on mules (Naz and I hiked) in and around the Atlas mountains. LOVE!!

We even brought Nanny with us too!